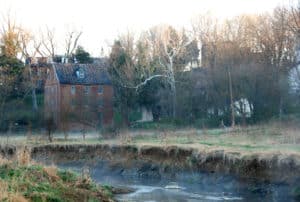 Along the Catoctin Creek looking at the Old Mill in Waterford

Waterford was founded about 1733 by Amos Janney, a Quaker from Bucks County, Pennsylvania. Other Quakers followed him there. Mills were built along Catoctin Creek. The village grew until it was the second largest town in Loudoun County (this was before the Civil War). Many buildings still in use in the village were built before 1840. Many Waterford houses were not maintained before 1940. This disrepair allowed these Waterford homes to remain in their original condition which you can see today after their restoration." More history »

Known as Janney's Mill until the 1780s, the early commercial center then became the village of Waterford. See below on how Wateford got its name.

as a commercial center after the Civil War meant it was not worth demolishing the old to make way for new development. The old town and its surrounding farms were able to slumber undisturbed, like Rip Van Winkle, for many years, By 1937, when the Historic American Buildings Survey was completed in Waterford, most buildings in the village were falling into disrepair.

That same decade, members of old Waterford families, beginning with brothers Edward and Leroy Chamberlin, began buying and restoring buildings. These restorationists established the Waterford Foundation in 1943 to "revive and stimulate a community interest in re-creating the town of Waterford as it existed in previous times with its varying crafts and activities.

The Foundation has played an important role in revitalizing the physical fabric of Waterford as well as increasing the public's knowledge of life and work in an early American rural community. In 1970, Waterford and 1,420 surrounding acres were designated a National Historic Landmark.

Another 1943 milestone was the creation of the Waterford Fair by the Waterford Foundation. This annual event now draws some 10,000 visitors the first weekend every October.

How Waterford Got Its Name

Waterford had two or three names in colonial times; Janney's Mill, Fairfax, and Milltown. While the first two names are part of the historical record, the third's textural appearance in found first in 1915, the anonymous writer asserting that "Mill Town" was a name for the village in its founding era. ... the same anonymous writer, who in 1915 first called the early hamlet "Mill Town," also forwarded to us the origin of the village's present name: "One of the most enterprising citizens an Irish Shoemaker by the name of Thomas Moore had emigrated this country from or near Waterford in Ireland. And he very patriotically named the rising city for the place of his birth..." As to when the name changed, my property, on the Old Wheatland Road west of Waterford, is described in a 1770 deed as on "the Great Road to Janney's Mill." Twelve years later the farm is on "the Great Road from The Gap [later Hillsboro] to Janney's Mill, now Waterford." Thomas Moore might have had persuasive powers, for the bustling seaport city of Waterford has little in common with the village, save for the latter's two fords and water. Waterford, Ireland, though, did have a substantial Quaker community. And there were several Janney's mills in Loudoun

From Loudoun Discovered by Eugene Scheel