The Village in Context to Its Land

Like a piece of fine crystal, an heirloom passed from generation to generation, once broken, it is gone forever. So too, does Waterford belong to time.
From The Waterford Foundation 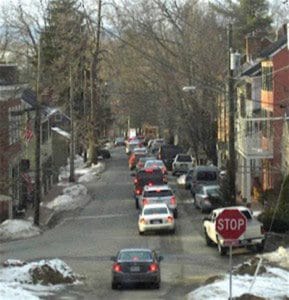 The village of Waterford is located 45 miles northwest of Washington, D.C., in the foothills of the Blue Ridge Mountains. Its quaint, pastoral setting is reminiscent of the year 1733 when the town was settled by a Quaker family from Pennsylvania. In many respects Waterford is a village out of time, a place where you can lose the worry and the harried ways of the 20th century.

During the last few years, there have been an increasing number of intrusions into this historic landscape. With the rising housing prices and expanding housing market in the Washington area, developers have become interested in the land and scenic quality of Waterford. With the prospects for farming steadily deteriorating, much of the farmland surrounding the town is now for sale. The threat of suburban homes sprawling across the rolling landscape is becoming a reality.

Formed in 1943, the Waterford Foundation's original purpose was to preserve the buildings of the village. With the advent of increasing development pressures, the Foundation has increased its mandate to include the historic open spaces and farmlands, or "viewshed", surrounding the village. The preservation of the historic town's "viewshed" is critical, since without its preservation, the historical relationship of the land to the village would be destroyed; as a result, the designation of Waterford as a National Historic ' Landmark would be withdrawn ' by the National Park Service.

The importance of the landscape to Waterford is much more than just an honorary federal designation. Much of the history of present day Waterford and the inescapable sense that you have traveled back in time comes from the interaction of the landscape with the townscape. Imagine the difference between the following two scenes: a group of historic homes surrounded by acres of parking lots covered with tour buses; and the same group of historic homes surrounded by the farmland and trees that existed 100, even 200 years ago. In the first instance the historic context of the homes has been lost; they are merely curious sculptures to be viewed and forgotten. In the latter scenario you can examine a town and its Winchester landscape in detail, propelling your mind back to the past. It is the latter image that Waterford citizens and the Waterford Foundation are striving to conserve.

From the Department of the Interior Report, "Linking the Past to the Future, A Landscape Conservation Strategy for Waterford, Virginia", 1992 Read the report