Cable TV in an Historic Village 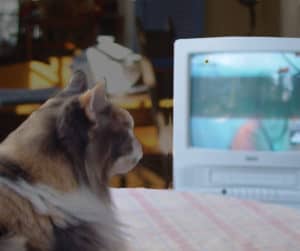 Jake came to dinner a few weeks ago. We talked about the nine muses, and why tragedy is important in human storytelling. Jake has been reading a lot of Greek mythology lately. He's eight. A few nights later, Jake's dad, Mike, and I walked up the hill to the old schoolhouse for a Citizens' Association meeting about bringing cable TV to Waterford, a town of 250 people in the foothills of Virginia's Blue Ridge Mountains. The hills do terrible things to TV reception.

The president of the cable company had come to tell us that it probably wasn't a moneymaker for him to string the cable all the way out to our eighty-some houses, but he felt it was only right to give us the chance to partake of the rich offerings of his service. He passed around the latest full-color guide describing what we were missing that month. The cover featured Melanie Griffith. If we had cable, we would have been able to watch her in the movie Milk Money.

Mike's house on Main Street doesn't have a TV. But like most houses here, it has broad views of farmland rolling away to the wooded hillside, and big, old maples in the garden. From the high meadow behind town you can look at the Catoctin Creek as it wends through the valley, and see why the young Pennsylvania Quaker, Amos Janney, figured back in 1733 that this would be a fine place to build a mill.

The mill is still there, and like most buildings in town, it has American history written into the horsehair mortar holding up its walls. Just opposite, there's a stone house whose Quaker inhabitant found slavery a worse evil than war, even though fighting for the Union caused him to be read out of Meeting for violating pacifist principles. The Baptist church on the High Street still has bullet holes in the bricks from the skirmish that took place there between the Confederates and Waterford's Loudoun Rangers, the only regiment raised in Virginia that fought on the Union side.

There aren't many Quakers here now, but they left behind a tradition of stubborn singularity. The townspeople--farmers and carpenters who've always lived here, artists and software designers who've arrived more recently--like the fact that this place is different: always has been, always will.

At the Citizens' Association meeting, the cable guy brags about how his service offers "more than seventy channels of the finest programming available." Mike, beside me, fidgets on his chair. Suddenly, he's speaking, softly and diffidently, as he always does.

"People here have time to talk to each other. I'm proud of our bad TV reception because it gets us out of our houses, and I'd kind of hate that to change because there's nine different football games to watch. Personally, I'd rather go fishing than watch the fishing channel."

The cable man doesn't realize that this is one of those Martin Luther moments, and that Mike has just nailed the theses to the door. His tone, when he replies, is unctuously patronizing.

"Well, that's your opinion and you're certainly entitled to it. But do you have a child?" Mike nods. "Then you should think about his future. He's going to be at a disadvantage when he gets to college and has to compete with young people who've been exposed to all the marvelous information that cable can bring them."

People who know Mike's boy Jake burst into loud guffaws. "That's bullshit!" shouts our neighbor Phil, sitting in back. And suddenly the tone of the meeting has changed, changed utterly. If Waterford could stand up to the Confederate States of America, it certainly can stand up to Cablevision of Loudoun County.

Someone who has just moved out here from a suburb that has Cablevision is on her feet, saying what a bunch of crap the programs are, and how she had canceled her subscription after a couple of months.

"Haven't you ever heard of books?" someone else shouts. "There's more 'marvelous information' in the local library than's on seven hundred cable channels!" Last year, the county decided that Waterford was too small to warrant visits from the Bookmobile. We had a meeting about that, too. Our neighbors Casey and Jeff donated the front room of their house--a bay-windowed storefront that used to be the village milliner--so we'd have a place to put a cooperative library.

That meeting wasn't nearly as loud as this one. The decibels don't come down until someone gets us off on a discussion of the life of Thomas Jefferson, and whether one could say it was impoverished for lack of television.

People barely notice when the cable man melts away. The next speaker is our neighbor Mary, who wants to tell us about laying rumble strips to slow the traffic through town. "Well," she says, raising an eyebrow, "I'm not sure I want to get up in front of this crowd."

The next morning, when we meet up at the post office to pick up our mail, a few of us allow that we feel a bit sheepish about more or less running the cable man out of town. But then we look up at the ugly tangle of power lines--one of the few twentieth-century intrusions in town--and consider how one more big thick cable running along up there would make it even more unsightly, and less likely that we'll ever realize the village's long-standing dream of getting the things buried.

Marie, who lives right across from the post office, grows a morning glory vine every spring. She trains it up the power pole in front of her balcony, and lets the wires become a trellis for a cascade of royal blue blooms. In summer, a team from the power company came out intending to chop the vine down. Marie gave them each a cup of tea and a fresh-baked scone, then put them on the phone with the local agricultural extension agent, who explained that morning glory is a tender annual that will be gone with the first frost. The team finished their tea, and decided they'd leave the flowers be.

In less than a week, word of the Waterford Cable Rebellion filtered to the outside world. It seems we're the first town in the United States to resist it. Reporters from the Washington Post, CBS news, Fox network, and even South Korean TV showed up and filed bemused, "can-you-believe-it" features about the bunch of oddball hayseeds who don't want cable.

It's become eccentric not to want every place to be just like every other place. It isn't just the cable. Waterford is battling a new law that says the eighty buildings here, which have done just fine for 250 years without addresses, must now post three-inch-high, light-reflecting, five-digit street numbers to fit in with a county-wide grid system. One tiny lane has all of three cottages. But the first house will have to post a number that makes it 15545 Butchers Row.

Perhaps we'd have a better chance of holding on to what's here if the history it represented was linked with the museum-like grand estate of some long-ago rich man. But what's here isn't grand. These cottages and ice houses and root cellars are the templates of ordinary lives.

The old rooms have a way of slowly shaping you to fit them. You arrive here thinking you simply must have more built-in closets, but instead find yourself shedding your excess wardrobe. You open up the old stone-lined, hand-dug well so your arms can feel the effort of hauling a full water-bucket up thirty feet. I suppose, if we had cable, I could be watching Body by Jake on the Family Channel instead.

Down on Main Street, my neighbor Jake is toning his biceps by helping his dad stack the woodpile. I think I'll amble down there and have a word with him about a Corinthian king named Sisyphus.