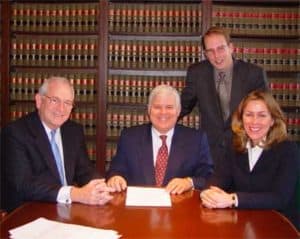 by Linda Wheeler, Washingto n Post
December, 2003
The Phillips Farm was officially transferred Thursday from a developer to the Waterford Foundation, which plans to preserve the 144 acres of green space on the western edge of the 270-year-old village.

Many of the village's 211 residents, who helped to raise nearly $3.9 million to buy the farm, cheered, applauded and toasted with champagne at a celebration at Old Waterford School. The outstanding balance of $173,000 on the sale was covered by a low-interest state loan, said Cate Magennis Wyatt, fundraising chairman.

In Waterford, where preservation is a way of life, the purchase represented the largest financial commitment by the foundation in the 60 years since it was founded.

She waved a long sheet of paper in the air. "Ladies and gentlemen, this is the deed to the property," she said. "It's the beginning and the end."

Adults stood to applaud, and children, energized by the noise, ran in circles and jumped up and down.

Keeping the land in agriculture was critical to residents because Waterford was designated a national historic landmark in 1970 by the National Park Service partly for its rural setting. Although the farm was never included in the historic district boundaries drawn by the state and county, residents considered it part of the village.

Last year, the foundation raised about $2 million to buy the property when it came on the market. But a developer, Historic Fields LLC, got the contract and announced plans to build 14 houses on the property, with several on the ridge overlooking the village.

The foundation approached the new owners to purchase the land, but no agreement could be reached. The Trust for Public Land, a national nonprofit conservation organization, stepped in and negotiated a contract in August that stipulated the land could not be developed. The foundation was still responsible for raising the money. The deadline was set for Oct. 31 but extended to Thursday.

Wyatt told the audience that she had made dozens of cold calls looking for donations and was repeatedly turned down. Then she reached Robert H. and Clarice Smith of Upperville. Smith, son of developer Charles E. Smith, listened to what she had to say.

"He said, 'Bring us a business plan,' " Wyatt said. "We went to visit with him during Hurricane Isabel. Before we could tell him the whole story from beginning to end, he stopped us. He said, 'This is what America is all about. Count us in for $500,000.' "

Robert Smith told the audience Thursday, "Today is a celebration of the spirit of all of you who live here. . . . Your leadership was determined to succeed and preserve Waterford. They prevailed by persuasion and diplomacy."

Rep. Frank R. Wolf (R-Va.), who had obtained a $1 million grant to buy the farm through the federal Farmland Protection Program, also spoke.

"I hope someday to being my grandchildren out here and say to them that I helped with this preservation," he said. "Waterford is a nice town and a caring community."

Resident and author Geraldine Brooks, who wrote opinion pieces for local newspapers about the importance of preserving the farm, said she was directing her comments to children in the room.

"When you go and walk on the land, you'll see we saved a lot of barn owls and blue herons," she said. "When you go there, if you are 5 or 7 or 10 or 47, you'll see that it is possible to change the world because of a community effort."

Kathleen Hughes, a Waterford resident and book publisher who helped Wyatt with the campaign, said after the ceremony, "We saved this little bit of land to teach our children where America started and what it was like."

Wyatt said a list of donors would be placed in a time capsule that will be buried on the Phillips Farm.

Then Wyatt called for a toast, and the audience raised glasses of champagne or ginger ale.

"On behalf of those who went before," she said.