Step Back in Time at the Waterford Market

Linda Landreth runs one of the few retail establishments in the village — the Waterford Market. She is also raises several dozen sheep just outside her market in the heart of Waterford.
Along with penny candy for the youngsters and fresh country lamb sausage, the store is full of hand crafted woolen products from gloves, hats and scarves to washing machine dryer wool balls. She also carries a limited amount of grocery items.
Her grocery store, with a pot-bellied stove and a dog sleeping nearby, and the Waterford Post Office serve as the town’s daily “meeting spots” for the village's residents.Step inside the Waterford Market and the pace slows. Linda is happy to talk to customers as she feeds the wool onto a spinning wheel to make yarn, keeping in step with an earlier era."I believe antiques aren't valuable unless you can use them," Landreth observed as she rose from the wheel and used a long grabber—another old and useful tool—to fetch a customer San Giorgio rotini from a high shelf.
Visitors to the market will see Landreth's 1940s-era freezer, her old-fashioned waist-high Coca-Cola cooler and her quirky system of price tags – an original boxed set of plastic numbers that slide into grooved tracks on the grocery shelves. (The box says: "Self-service modern price marking systems for grocery, meat, drug and liquor stores 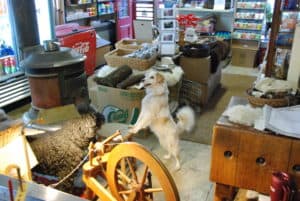 "I don't think you can get them anymore," Landreth said, delicately fingering the neat containers of plastic tabs. "They're probably as old as the store."
Three circular moldings on the ceiling held kerosene chandeliers in the store's earliest incarnation as a dry goods store immediately after the Civil War.
"This was a fancy store where women came dressed up to get their fabric and ribbons," Landreth said. "It was converted in the 1930s to a grocery store, and all these things were carted away."
The shop owner has come by her bits of arcana through an avid attention to her customers. Landreth is always ready to hold up her end of the conversation – "I'm generally pretty upbeat" – and her eagerness to listen has yielded scraps of history. A silver-haired man who came in for a snack six or seven years ago suddenly stopped in his tracks when he noticed the hulk of the 1940s freezer. " He said, 'I'll be, it's a Tyler. I haven't seen one of these in years,' " Landreth recalled. The man went on to tell her that the company, based in Niles, Mich., manufactured the freezers out of sheet metal and insulated them with sawdust. The man had worked with the model that is in the Waterford store.
Such information is kept alive for years through conversations passed roundhead's store. " Sometimes I think I got to do something about this; it's too confining," she said. "Then someone will come in and it just makes your day. You learn something. You have the opportunity to meet people." That goes for lunch hour, too. This is not, Landreth will tell you, an urban-style store where people walk in, order, and dash out.
Scroll To Top