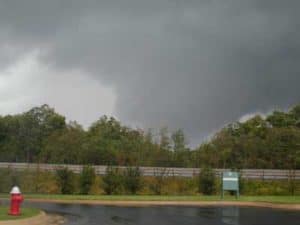 A series of news reports about the tornadoes spawned by Hurricane Ivan.

Sep 17, 2004. Up to four tornadoes were reported locally as the remnants of Hurricane Ivan moved across Loudoun County this evening, causing damage to numerous homes and a fire at Leesburg Executive Airport. According to the National Weather Service's Baltimore/Washington forecast office located in Sterling, four separate tornadoes swept through the area Friday night, affecting Hughesville, Lovettsville, Hamilton, and Dulles.

Flights were grounded at Dulles International Airport, where the first tornado touched down at 6:11 p.m., and for an hour and a half as airport personnel waited for the tornado to pass and staff members at the Sterling weather station said that they could see the tornado just outside their windows.

"We're located about a mile from the airport," said Luis Rosa of the National Weather Service. "We actually saw it from here in the office."

Although there were widespread accounts of damage to homes and buildings and many residents were without power, no injuries were reported. Loudoun County Fire and Rescue crews began scrambling shortly after 5 p.m. when severe storms began moving in from the south, heading in a northwest direction across the area. By 6 p.m., the visibility on Rt. 7 was about 15 percent.

The storm cell, which spurred tornadoes in the Opal and Warrenton areas of Fauquier County, moved quickly through western Loudoun. Downed trees and power lines forced the closing of Rt. 704 west of Leesburg and the storm’s path could be followed with a line of twisted and broken tree limbs to Hamilton. The Hamilton Orchard subdivision was hardest hit, with several homes damaged by falling trees and limbs. That cell continued north, causing damage in Lovettsville before crossing the Potomac River.

In some areas, rush hour traffic came to a stop as motorists watched for funnel clouds and dangerous weather. Those driving along Rt. 28 and Rt. 7 got an up close view of a tornado that moved up the west side of Rt. 28, passing behind the Wegmans store before dissipating and moving across the river into Maryland.

Meanwhile, one of the numerous lightning strikes that occurred during the storm is believed to have caused a fire at the Justice Hangar at Leesburg Executive Airport. The flames and heavy smoke were reported at the facility and the large front door had buckled outward. One plane inside appeared to be severely damaged.

By 8:30 p.m. that evening, though the worst of the weather seemed to have passed, the National Weather Service has extended the tornado watch until midnight in response to the unpredictable system and Loudoun County's Emergency Operations Center did not stand down until 1:10 a.m. By 8 a.m. that following morning, NWS recorded a total of 2.34 inches of precipitation due to the storm.

"It was moving pretty fast—50 miles and hour—so it didn't have the chance to dump a lot of rain," said Rosa. "If it had been going, say 15 miles and hour, we would have seen about 10 inches of rain."

Sept 23, 2004. One F1 tornado swept through parts of western Loudoun Aug. 17, according to a preliminary report released Wednesday by the National Weather Service's Sterling office. The damage caused by the tornado, while noted as significant, was "intermittent." The Fujita, or F, Scale is used to measure how much damage a tornado causes. F1 tornadoes have wind speeds of 73 to 112 mph, and cause moderate damage.

The report said the tornado - which migrated north from Fauquier County, where it was an F3 - first touched down in Loudoun south of Hamilton, with most of the damage south of Route 7. The path of the tornado's damage extended along a 10-mile path, which stretches from south of Hamilton to Lovettsville. The storm continued north into Frederick and Washington counties.

September 23, 2004. After the tornado peeled off half of Donna and Joe Rogers's roof and tossed it a quarter-mile across their Hamilton farm Friday, the couple slept under a plastic tarp to avoid the rain that dripped on them through the ceiling.

This week, the glorious fall sunshine -- aided by a temporary roof -- has kept the Rogerses and their Colonial home on Harmony Church Road dry. It also has shed light on the extent of damage to their farm, one of the spots hardest hit by the torrential rains, strong winds and tornadoes that swept through Loudoun and Fauquier counties from about 5:15 to 11 p.m. that night.

Damage in Loudoun County alone was estimated at $3.5 million. There were no serious injuries.

When the storm raced westward across 1,100-acre Hillbrook Farm, which has been in Joe Rogers's family since 1792, it damaged hundreds of trees and uprooted several. It tore off parts of the roofs on two barns and knocked down fences that separated their 30 horses from their 150 head of cattle and kept them all from getting loose. Two of their thoroughbred horses were cut by flying debris. One chimney on their stately stone house was ruined, and upstairs windows were shattered. A treasured family coat of arms was soaked beyond repair.

"You just can't believe it until you see it," Donna Rogers said of the scene at the farm, which early this week was littered with massive branches. Oriental rugs were hung to dry on fences. Big sections of crumpled metal roof lay next to the house, shingles next to the barn. "We lost a lot of very valuable things that are just irreplaceable," she said.

The couple were home Friday night when they got a call from Donna Rogers's brother, William Truslow, who lives in Vienna. Truslow told them that a major storm was headed their way and that they should run for the basement.

Rogers said she looked out her bedroom window and all looked calm. Suddenly, the sky darkened, and a howling, twisting wind came rushing from the east.

"Stuff was just whirling by," she said. "It's sort of like 'The Wizard of Oz.' Everything that could move was rumbling."

Later that night, neighbors, friends and some strangers began showing up with flashlights, tarps and chainsaws to cut fallen branches into smaller pieces. The next day, more friends showed up to help clear branches and debris from the long driveway to the Rogerses' house.

"The outpouring from the community has just been unbelievable," Donna Rogers said.

Remnants of Hurricane Ivan spawned at least three tornadoes in Loudoun and several in Fauquier, according to emergency officials in both counties. The strongest was between 200 and 450 yards wide, measured F3 on the zero-to-five Fujita scale -- meaning wind speeds were 158 to 206 mph -- and traveled at least 20 miles through Fauquier. The Meadows subdivision in the southern Fauquier town of Remington "took a direct hit," said Fire Chief Philip Myer of the county's Fire and Emergency Services Department, with seven homes destroyed and 18 severely damaged. One home was pushed slightly off its foundation. A new pickup parked in a driveway on Sumerduck Road was lifted by the wind and hurled more than 75 yards over trees and a power line before crashing upside down in a field.

The tornado weakened to an F2, with winds between 113 to 157 mph, as it moved north of Remington but grew to almost a quarter-mile wide as it crossed Beach Road and Route 15. South of Broad Run, the tornado regained strength and destroyed trees, firing branches into buildings, before heading into western Loudoun.

"It's on the higher end of what we usually see in this part of the country," said Steve Rogowski, a meteorologist at the National Weather Service, noting that most tornados in the mid-Atlantic are F2 or below. "It doesn't take an F4 or F5 tornado to inflict a lot of damage. Even the smaller tornados can inflict damage and be life-threatening."

In Loudoun, an F2 tornado touched down in the Ashburn area, and two less powerful tornadoes touched down in western Loudoun. The first tornado came into eastern Loudoun from Fairfax near Dulles International Airport and passed a half-mile from the National Weather Service's office in Sterling, where employees took cover in a concrete-reinforced "safe room."

The tornado then headed north, just west of Route 28, where 22 employees of a building in the Beaumeade Corporate Park were evacuated after their building was damaged and suffered a gas leak. The employees took shelter in a Loudoun County school bus, according to Mary Maguire, spokeswoman for Loudoun fire and rescue.

Seven buildings in the park suffered a total of $2.6 million in damages, said the Loudoun County Office of Emergency Management. The roofs of several buildings were damaged, air conditioning units were ripped out, one wall collapsed and two cars were driven into the side of one building.