Today, the village streets bustle with commuters and surrounding farmland is dotted with MacMansions. Yet the core village and much of its viewshed remain preserved. How much has changed within the landmark during the past five decades? Local, state, and federal historic preservation leaders are hoping to find out. 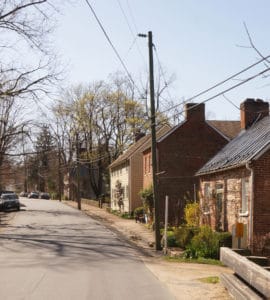 The Waterford Foundation is kicking off an innovative partnership with the U.S. National Park Service, the University of Delaware’s Center of Historic Architecture and Design to update the inventory of significant assets within the designated National Historic Landmark.

Also partnering in the two-year effort is the Virginia Department of Historic Resources and the Loudoun County Department of Planning.

Waterford Foundation Interim Executive Director Stephanie Thompson is looking forward to the meeting, during which the Kathryn G. Smith, the National Historic Landmarks and National Register coordinator for the parks service, will outline the project for residents and introduce members of the team.

“It’s exciting,” Thompson said, particularly as the project has come together over the past few months. She said the foundation will serve as a liaison to the community for the project, which is proposed to start in December and continue through 2020. She noted the foundation board and committees have long talked about the need to update the landmark data, and is delighted the University of Delaware’s CHAD students will be starting their fieldwork in the coming weeks.

Waterford Foundation Director of Planning Margaret Good noted there are about 180 properties in the landmark, including about 100 structures in the village proper.

Most of the houses within the village already have either façade or conservation easements in place to support their preservation. During Wednesday’s meeting, residents interested in placing their properties under easement will learn more about the process, according to Thompson.

Waterford was granted historic landmark status in 1970, primarily in recognition of the balance between the buildings and structures of the 1733 village and the unspoiled surrounding open space—a historic feature that many other communities had lost.

Brown Morton III, a resident of the village at the time and an architectural conservator with the National Park Service, developed the original boundaries of the district and he will be on hand during the community meeting to describe his methodology. His boundaries were approved by the Virginia Department of Historic Resources and later adopted by the National Park Service before being recommended to the Secretary of the Interior.

An update of the landmark and its assets has been strongly supported by the county and the state, according to Good. “The documents don’t tell the full story.”

The project got a kick-start earlier this year almost by happenstance after Smith had contacted Good about a one-room schoolhouse project the parks service was working on.

The meeting was attended by historian Bronwen Souder, who had been involved with Waterford’s long-standing one-room school project, as well as Loudoun County Preservation Planner Heidi Siebentritt, and Aubrey Von Lindern, architectural historian with the Virginia Department of Historic Resources. The need to find funding to update the landmark documentation also was discussed.

The foundation came up with a plan for the update that involved seeking grants—but they proved to be elusive. “We realized the foundation just did not have the resources necessary to manage the project,” Good said.

But at the end of February, Smith said she might be able to help with funding, and wanted the foundation’s agreement that the project would be run by the park service. Smith also offered to explore her contacts with educational institutions to help.

“That was great news. Not only did NPS have the financial resources but they had the expertise to manage the project—and connections with universities to provide students to do the actual field work. What’s not to like about that—it’s a win-win all around,” Good said.

The CHAD students and their professors will arrive in the village next month to begin fieldwork, documenting and photographing all the structures in the landmark.

Siebentritt welcomed the news and said the county staff would do all it can to support the project.

“It’s an extraordinary place,” she said. “We need better documentation—with new people moving in, very busy traffic patterns, etc.—we really need an update to the base line information on Waterford so we can see what tools to use to preserve it, how to manage those changes.”