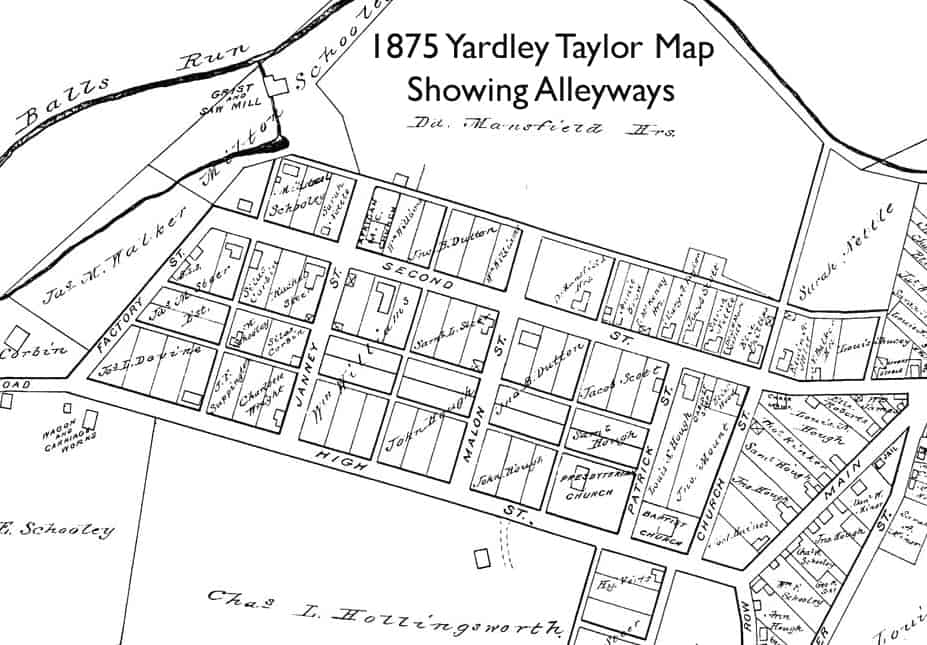 Following a 99-0 vote in the House of Delegates Wednesday, 76 years of uncertainty concerning the legal ownership of roads and alleys in historic Waterford is moving toward resolution.

The "alleys issue" has deep roots, dating back to the Civil War, but also has modern ramifications—including the possibility of prompting the county's oldest business to find a new home.

After Virginia was re-admitted into the Union in 1870, the General Assembly required each municipality to make surveys. Surveyor James Odin's 1875 map of Waterford depicts the many alleys located in what was then known as the "New Town" section of the sprawling town, lots owned by Mahlon Janney.

Waterford de-incorporated in 1936 and over the ensuing decades alley rights of way were absorbed into the community—some have garages built on them, some have trees growing in their midst, some have been used as driveways or incorporated into gardens and almost all have not been used by the public for half a century or more. Most villagers are unaware of exactly where the former alleys were located, or who owns them.

The General Assembly bill, sponsored by Del. Joe T. May (R-33), resulted from the efforts of Supervisor Geary Higgins (R-Catoctin) to clear up the uncertainty. After meeting with residents, he suggested the county take ownership of the alleys.

The bill, which now heads to the Senate for review, would vest ownership of the former town's alleys, streets and other public rights of way in the county government.

Community leaders were quick to express their satisfaction Wednesday over the measure's passage in the House.

Waterford Citizens Association President Ed Good said he believed the conveyance of the rights of way to the county would put an end to the uncertainty. During the WCA's monthly meeting last week, members unanimously adopted a resolution of support for the bill.

"For years and years, no one has known who owned the alleys," he said. Legally, the alleys belong either to the Janney heirs, adjoining landowners, or the County of Loudoun, according to the WCA president. The county government would be the best owner and would have the ability to more clearly define lot lines for properties adjoining the alleys, Good said.

Higgins told the WCA during its Jan. 24 meeting, the board of supervisors would seek to preserve the current land usage status quo. If an alley is not being used, the county intends to deed the land to the adjoining landowners. If an encroachment, such as a garage or a tree, sits in a right of way, the county would authorize its retention. Likewise if an alley were in use as a public way or as a driveway, the county would preserve that use.

Yesterday, Higgins said he was pleased with the unified support the bill received in the House.
"It sailed through and I'm very happy about that," Higgins said, attributing the bill's success largely to the work of May and his staff. Higgins and his own staff contributed by sending photographs and documentary materials as support materials for the subcommittee to review.

As to how the bill will fare in the Senate, Higgins said, "I don't see any problem there." Sen. Dick Black (R-13), whose district includes Waterford, is working on it and Sen. Mark Herring (D-33) has also expressed interest in sponsoring the bill so there would be a bipartisan approach, according to Higgins.

Higgins also said it was important that village residents continue to support the proposal.
The alleys ownership became the subject of a legal battle between Waterford homeowner Milari Madison, whose Janney Street lot is bounded by two alleys, and a group of neighbors, including Loudoun Mutual Insurance, whose property also includes alleys shown on the Odin Map. That litigation ended with a ruling that Madison owned the land within her current lot boundaries and not the alley ways. The larger question of alley ownership throughout the village was not adjudicated in the case.

The original portion of the company's High Street building—its third location in the village—was modeled after Gunston Hall. After the company outgrew that space, an addition was built on its western flank in 1993. LMI President Chris Shipe says the company is planning now for another expansion. "We're out of room, we're out of space," he said.
Whether the company expands on the site, or moves to a new location—likely outside of Waterford and possibly outside Loudoun—depends in part on the resolution of the alley issue.
On survey maps, the company's lots have three alleys crossing them, but Shipe said the rights of way have not been used for public access for more than 50 years. If the company were to expand, one of the alleys "would go through our mail room," Shipe said.

Because of the ownership uncertainty, a clear title ruling could not be obtained from a surveyor. "We need to get this cloud off people's properties," Shipe said in December.

While Shipe said LMI wants to stay in Waterford, the company has grown into a regional insurance company, extending its presence significantly down the I-81 corridor. Once, all of the company directors were local residents; now only two of the 10 regional representatives are from Loudoun. Moving the headquarters to Berryville or Winchester has been suggested as an alternative to expanding in Waterford.

"We want to be a good neighbor and find common ground," Shipe said.

Today, a relieved Shipe said he was thankful the General Assembly had supported resolution, not just for his company but also for the community at large.