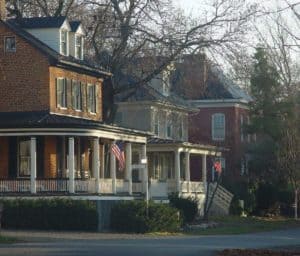 In tiny downtown Waterford, the old brick, stone and timber houses huddle close to narrow sidewalks, letting people feel that although they're far from any city, they're close to their neighbors' lives. It's a centuries-old idea of community, buffered by vast rolling farmlands that still separate historic Waterford from the ever-sprawling suburbs of Loudoun County.

There are no traffic lights, or even stop signs, in this village 40 miles northwest of Washington. The homes have no street numbers, which makes for innovative directions for United Parcel Service or Federal Express packages.

The town's 250 residents pick up their regular mail at the post office on Main Street. Down the road, in a weather-worn building dating to about 1900, is Waterford Market, a small convenience store and the town's "commercial hub."

Waterford's ambiance enveloped Mary Dudley, who bought and refurbished a home here nearly 14 years ago. What still strikes Dudley is the absence of front yards.

"Sitting in your doorway, you can't help but become a part of your neighbor's life and vice versa," Dudley said. "I think it's like living in a neighborhood in New York, where everything is so close together. Everybody knows each other -- you may not be closest of friends, but you know who they are."

For the most part, Waterford has remained unaltered since it was founded 262 years ago by Pennsylvania Quakers. For that reason, the Interior Department granted the village and the 1,420 acres of surrounding farmland national landmark status in 1970. Waterford is one of only a handful of villages in the country with that designation.

While Waterford's identity is forged in its past, the village is a living community, not a museum. Its residents include young couples and retirees, the affluent and the middle-class.

Jeff Nesbit, a business and political consultant, and his family visited small towns in the Washington area for several months before settling in Waterford a year and half ago. The area's schools attracted him, said Nesbit, who is president of the Waterford Citizens' Association. But he also was drawn by the sense of community activism and small-town neighborly attitudes he found here.

Nesbit turned the storefront of his house into a library. The books have been donated by other residents. Nesbit keeps a pot of coffee hot and the door unlocked for leisurely readers.

"There's a lifestyle here that is increasingly hard to find anywhere else," Nesbit said.

But along with the peace and quiet of a small town come annoyances. Despite the town's name, water can be a costly commodity. Residents depend on well water for bathing, cooking and cleaning. Thus, if the well runs dry, homeowners have to dig for more water.

And older homes may be charming, but they need constant maintenance and upgrades. Residents said they're willing to put up with the extra work in return for such things as contemplative walks shaded by centuries-old trees.

"I see a cohesiveness among the people here, working toward a common goal to preserve the town as it is," said Charles Anderson, who runs the Pink House bed and breakfast with his wife, Marie. Charles Anderson, who also operates the local real estate office, said most homes in town cost from $200,000 to $500,000.

Noticeably missing from Waterford are the hotels, restaurants and antiques shops usually associated with villages steeped in American history. There are no plans to change that, Anderson said.

The main force in keeping the town the way it is has been the Waterford Foundation. The foundation, a preservation group, has raised money to buy buildings and land in the village to maintain the pristine surroundings.

The Foundation's main source of money is a crafts fair held every October. About 15 historic homes are opened for walking tours. The fair features craft demonstrations including basket weaving, metalworking, jewelry and silversmithing. The crafts date back to Waterford's earlier days in the 1800s when it was a commercial center for the surrounding farms, complete with shops, taverns and tanneries.

Because the town offered jobs then and Quakers usually were opposed to slavery, Waterford attracted a number of newly freed slaves, according to a historical account compiled by the foundation.

On the eve of the Civil War, more than 150 African Americans lived in Waterford's vicinity. Two years ago, descendants of Waterford's African American families, who have moved to all parts of the country, held a homecoming picnic to learn about their ancestors.

Some residents wonder how long Waterford can maintain its identity amid Loudoun County's expanding suburbs. Soon, the Dulles Toll Road extension will open from the airport to Leesburg. As in much of the county, nearby landowners are constantly weighing whether to sell to developers. Waterford's residents can do little but watch the county's population grow.

"Sometimes it feels like we're being slowly pecked away at, a little here and there," Dudley said. "Before too long, development will be on Waterford's footstep."