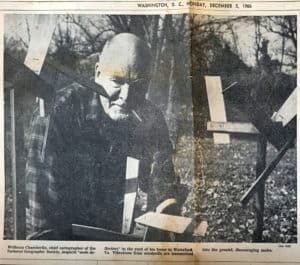 WATERFORD, Va. If anyone should ask about the little whirligigs that make a clacking sound in Wellman Chamberlin's back yard, the answer is they are "mole deflectors. According to Chamberlin, who is chief cartographer for the National Geographic Society, these little gadgets are anathema to a mole.

A mole, he says, simply can't stand that clacking sound and the resulting vibrations set up by the little windmills. They go into someone else's yard. This, he says, is the humane way to get rid of moles. You don't set spike traps for them, you just deflect them from your yard with the little clacking windmills.

Chamberlin saw his first "mole deflector" down at Charlie Gill's house in Matthews County, Va. It had been brought in from California, where it was said they do a fine job of getting rid of moles. He came home, and in a single afternoon made tive windmills, complete with clackers, and set them on sticks which he pushed into the ground.

As the wind blows, the windmills turn and the clackers clack. There is noise, and a resulting vibration which is passed down the stick into the ground. This the moles don't like, so they make their burrows in some other yard. Mrs. Chamberlin said the noise of the windmills doesn't seem to bother birds. "I heard a strange clacking the other morning," she said, "and when I looked out the window, there was a pheasant. Probably thought the windmill was his mate calling."

Oh Moles — What Bores You Are!

Twas the night before Christmas
And throughout the borrow
Sat desolate moles
Their brows all in furrows.
They were all gathered in protest
Admitting their fear
Lest the windmills of Wellman
Meant a sleepless New Year.

They appealed to his love of all creatures
His devotion to maps-lines and poles
And implored him to silence the clacking
And stop interfering with Moles.

He countered with charges a plenty
Of ruin to gardens and plants
Saying "this isn't funny
Its the work of no bunny
Nor of beetles — nor aphids — nor ants.
Its the work of your underground
Night after night
That has brought us this scourge,
This withering blight.
So cut the semantics
And nocturnal antics
And shed your demolishing vice.
Return to the sunlight —
The fresh air — and live right
And end your collusion with mice."

Oh Moles! — What bores you are!