by Eugene Scheel
A Waterford historian and mapmaker. 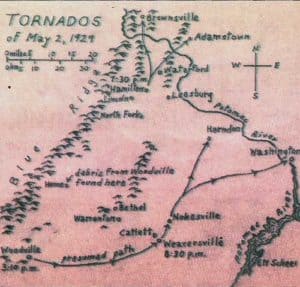 The National Weather Service of Virginia designates the first week in May as Severe Storm Awareness Week because of the record six tornadoes that struck the state May 2, 1929. The storms killed 22 people and countless farm animals and destroyed hundreds of structures.

Four of the six tornados, spawned by one storm system, hit this area within five hours. Of the many people who recall the disasters, most said they remembered that the cyclones touched ground after hours of driving rains and ever-increasing winds. Each tornado cut a runway of devastation about two miles long and 600 to 900 feet wide.

" It just went up and down, hopping from place to place," Arabelle Laws Arrington told me recently, as she described the tornado that killed her father and demolished her family's house and dairy farm in Weaversville in lower Fauquier County. It "cut through the woods like they had put in a power line."

It Starts in Woodville

Woodville, the third-largest town in Rappahannock County, was hit first. The hands of a wall clock found in the debris of the community's four-room frame school were stopped at 3:10 p.m.

Marshall Hawkins, 14, who had stayed in the building to talk to his teachers, was killed by the collapsing building. Fifteen houses, two or three stores and three churches were destroyed, but not Shiloh Baptist, the town's black church.

By telephone and telegraph, news of the Woodville twister soon reached Catlett, a large village on the Southern Railway, 30 miles east of Woodville and 11/2 miles north of Weaversville. There were no area radio stations in 1929.

" It had rained all the day long, and when the weather was bad, my father came and got us" at the Catlett school, Arrington recalled. "We usually walked the 11/2 miles to school. There was no school bus."

Her father was dairy farmer Henry Boyd Laws, 35. His 274-acre Brick House Farm at Weaversville was the pride of the village, population about 35, with seven dwellings and a store. The farm's name came from the house, Weaversville's one brick structure, which had numerous Minié balls embedded in its walls, reminders of three Civil War actions that were fought in and around the village, then an important mill seat.

For Arrington, then 7, her brother, Winfield, 10, and other children, enjoying life often meant trying to pick the Minié balls from the brick and mortar of the house, a task usually interrupted, she told me, by her mother's words of admonishment to leave them where they were.

There would be no playing outdoors that late afternoon of May 2, 1929. The carbide lamps that hung from the ceiling of the Laws home were turned on early to brighten a dark day.

Shortly after 8 p.m., the lamps began to sway, and "then we heard a terrible noise, and we saw boards flying by the window," Arrington said.

The boards were remnants of the Laws's outbuildings and the homes of William Blackwell, 11/2 miles southwest, and Ensey Robinson, a half-mile away.

" My father, my brother and me started upstairs, maybe to get my mother [Blanche Cowne Laws] and Layton Laws, my cousin," Arrington said. "He was staying with us so he could go to the Catlett school. My mother had gone upstairs to turn down the covers for her brother [Winfield Cowne], who had retired." Also upstairs was the Laws's housekeeper, Evelyn Ennis, who did not retire because of the high winds.

" At the same time we started upstairs, my mother and cousin were coming down the stairs," Arrington said. "We met on the first-floor landing. Then the house fell in on top of us. I remember I was laying on top of my mother, and she was screaming and hollering over and over, 'Help.' We were under eight feet of brick and mortar. They [neighbors] knew we were there, but they couldn't get us for a while. But soon, my mother said she could see some light. We think a beam hit my father in the back of the head. My brother and cousin didn't have a scratch."

Benjamin Franklin Colvin, one of the rescuers from Catlett, later told some Weaversville survivors that Helen Wean, who lived with her parents on the edge of the tornado's path, had heard Ennis yell after she extricated herself from the brick rubble. Wean then ran to Catlett to call for help.

When I asked Arrington how it felt to be fatherless at 7, she replied: "At that age I really could not comprehend my dad being gone. My mother made up for it. I think we just did never talk about it."

Arrington recalled that after she and her mother were rescued, "Fox Riley took off his coat in the pouring rain, covered me up and put me in Harry Wilson's car. He drove me to the Warrenton hospital."

Colvin, telling of the tornado in a May 8, 1929, letter to the Fauquier Democrat, cited Catlett men Wilson, Donald Gray, Fisher Crittenden, Hoyt Orndorff, Leslie Colvin and James Day as the main rescue crew, along with Elwood Allen and Thomas Whiting Cowne, Blanche Laws's father, who lived in Weaversville.

The tornado, possibly the same one that had hit Woodville, destroyed four of Weaversville's seven houses, and Luther Allen's store, across Elk Run Road from the Laws's farm.

" I invested a lot of money in that store," Arrington recalled, "Every time I got a few pennies, I'd go over there and buy candy."

Surveying the damage the next day, Colvin noted the destruction of the homes of Allen and his brother Charles Allen.

Arrington remembered another destroyed home, whose occupant, Thomas Jackson, was found unconscious in a nearby field the next day. The homes of Lamar Colvin, Belle Coates and Thomas Whiting Cowne were badly damaged, but were rebuilt and stand today.

Arrington told me that her family's entire dairy herd of 25 or so cows was killed, along with the farm's four work horses, the children's four ponies, 17 hogs and many chickens.

Dessie Allen was the only survivor of the Charles Allen family. Her husband was buried in their house, and their 16-year-old twin daughters, Elmer and Myra, had been lifted aloft, then dropped into nearby fields.

" My mother took Dessie in after the Red Cross bought us a house in Catlett," Arrington said. "I recall they gave us $5,000. They also bought Dessie a little house in Catlett after she came to live with us. She'd take care of us. She was a sweet old gal."

The funds to buy new houses came from a tornado relief committee organized in Warrenton on May 13. Its goal was to raise $15,000 for the victims, and one assumes it did, though newspapers lost interest in the subject by June, when $6,300 had been garnered.

As for the tornado, after going aloft northeast of Weaversville, it hit ground in Nokesville, 51/2 miles away. There, Arrington remembered hearing, "a baby in a crib was unscathed after bricks fell all about her."

With the storm's winds diminishing, the path then led to Herndon, where Henry Laws's coat was found in a tree, 28 miles from his home. By the time the winds reached Washington, they were clocked at 60 miles an hour, half the estimated velocity at Weaversville.

When I asked Arrington how her mother fared after the tragedy, she replied: "With some of the money, she started up with one little shed back on the farm and started raising calves. That's when I learned to cook. Soon, she had a small dairy herd. Then she had a barn built. By 1939, mom bought another 225 acres, Maple Hill, near Calverton and sent me to college -- Mary Washington. Maple Hill is still a dairy farm."

In 1964, at age 73, Blanche Laws decided two dairy farms was too much of a chore, even though her son Winfield "Pete" Laws helped her, and sold Brick House Farm. She died at 96.

Loudoun's May 2, 1929, tornado touched down a mile north of Hamilton in fields and woods, destroying but one home, that of Preston Ash, a farm laborer. Arthur Lybolt, editor of the Blue Ridge Herald, wrote that "the house, barn, out-buildings and trees looked as if a giant had taken a hammer and beaten everything flat."

Then the cyclone hit its prize, the brick 1832 Catoctin Free or Union Church, "free" meaning that various denominations worshiped there. The first frame building was built at the site in 1804.

Francis Peacock, 11, who lived nearby and whose family had attended Catoctin from its beginnings, heard from his elders that the winds "drove straw into the telephone poles as if it were nails."

The congregation met May 12 "to plan for the future," stated an article in the Loudoun Times Mirror. But that fall, the stock market crashed and the Depression ensued. Despite its mild in Loudoun – an unemployment rate of six percent – priorities changed.

Catoctin's worshipers drifted to the Waterford Baptist and Presbyterian churches, and to an old private school, Paeonian Springs Academy, where the Episcopal Rev. Howard Cady held services every fourth Sunday.

From the church, the tornado struck north, leveling a barn in Eudora, the J. Forrest Manning farm, then striking the R.E. McCarty farm, now the Light farm, of which Lybolt wrote "not a fruit tree is left standing." Four chicken houses were also carried aloft.

At the Arthur Phillips farm, adjacent to McCarty's on the east, Lybolt stated that "every building was either wrecked or damaged." The Phillips farm, in recent decades owned by the Travis Brown family, is the farm the Waterford Foundation is trying to purchase to save from development.

After two miles on the ground, with its swath estimated by observers at half a mile, the tornado lifted before it hit the Old Wheatland Road. With wind velocities decreasing, the storm split in the upper air, expending itself in Maryland's upper Pleasant Valley, near Brownsville, and near Adamstown in Frederick County.

The tornado prompted old-timers to talk of the past cyclones they remembered: the May 1890 twister that blew in from Wildcat Mountain into Warrenton and Bethel and the May 1896 tornado that destroyed the Cox farmhouse and outbuildings near Catlett.

Since 1929, some short-lived tornados have sliced off the second stories of two brick houses of worship in Loudoun. A February 1943 storm truncated the 1817 Goose Creek Friends' Meetinghouse in Lincoln. A June 1948 blow lowered the roof line of the 1856 North Fork Baptist Church.